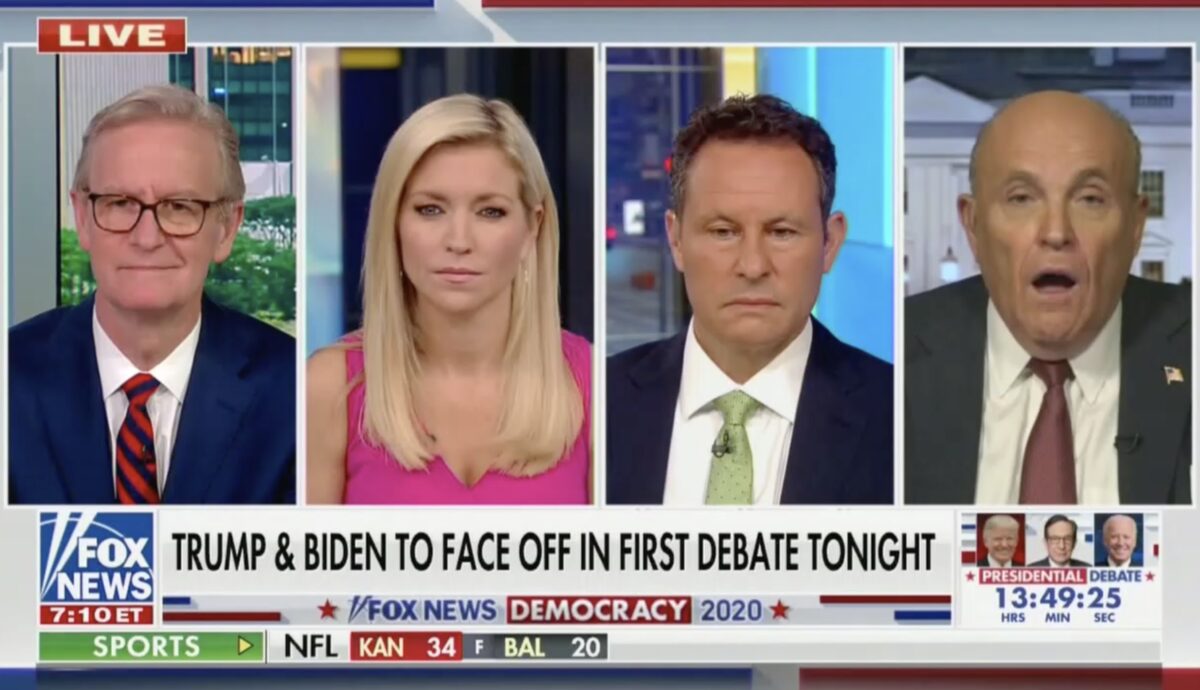 In a curious move that only lowers the bar of his political foe on the day of the first presidential debate, former New York City Mayor Rudy Giuliani flatly claimed that Joe Biden has dementia. No, Mr. Giuliani is not a doctor, but during a Tuesday morning hit on Fox & Friends, he claimed to have spoken to gerontologists who insist that the former Vice President is in mental decline.

But perhaps more notable in the clip is just how uncomfortable the Fox & Friends host appear to become with Giuliani’s specious, and frankly, juvenile claim.

“Look, the man has dementia,” “There is no doubt about it. I have talked to doctors. I have them look at 100 different tapings of his. Five years ago and today.”

Co-host Steve Doocy interrupted with “The Biden people say he is fine.”

“What? He can’t recite the pledge of allegiance, and he is fine?” Giuliani continued. “He was in the senate for 160 years? I mean, [Biden] can’t do the prologues to the constitution of the United States or the declaration of Independence, any of them? He can’t do numbers. Wow, are the numbers screwed up!”

And so it went. Giuliani continued on one of his signature cable news fillibusters that may explain why he has spent such little time on typically pro-Trump Fox News opinion shows since a spate of unhinged rants connected to his Ukraine sorties from yesteryear.

As Giulian prattled on, the looks on the faces of Doocy, Ainsely Earhardt, and Brian Kilmeade seemed to suggest that the on-air hosts were looking for the Showtime at the Apollo clown to give them the hook.

“I think the president is quite right to say maybe he is taking Adderall or some kind of an attention-deficit disorder thing,” Giuliani continued.

“That’s why the president wants to take the drug test,” Doocy responsibly interjected, adding, “That’s just your opinion. It will be interesting to see what happens tonight.”

Of course he has, anyone who says he hasn’t is a leftie!!

How to Use TENS Machine to Deal With Arthritis Symptoms

Starbucks Holiday Drinks: Which Is the Healthiest?

These Are the Best Diets for Your Poop, According to Nutritionists

Meghan Markle Apparently Wants to Raise Her Baby on a Vegan Diet—but Is That Even Safe?